Jill has been working with and training animals her whole life. Her desire to care for them led to four years of experience as a Veterinary Technician, providing her with extensive knowledge in first aid and preventative care. She was always most fascinated by behavior, though, and that interest led her to pursue a career in marine mammal training while doing some dog training on the weekends. For nine years, Jill worked with gray, harp, and harbor seals and Atlantic and Pacific bottlenose dolphins, gaining valuable experience in positive reinforcement training techniques. She also attended various training workshops involving walruses, sea lions, penguins, otters, and elephants. Training large mammals to participate in medical exams voluntarily requires plenty of patience, and Jill’s compassion for animals is obvious when you see her interact with them. As a Senior Marine Mammal Trainer, she had the opportunity to train three dolphins from birth, so she has the skills needed to work with young, naive animals. She enjoys watching the animals (and their humans!) learn and helping people bond with their dogs during the training process. Her own dogs are her children, so she understands the importance of having them in your life.

Jason has worked with numerous exotic and sometimes rare animals, including amphibians such as salamanders and poison dart frogs, large reptiles like crocodilians and anacondas, as well as primates, birds, hoofstock, and venomous insects.  His eight years of college education to the level of a Master’s degree in Biology served him well for many years in the field of animal care and it now serves him well in the art world.  You don’t see him at the daycare much anymore as he has transitioned to being a full time artist making metal sculptures of animals and plants.  You can find his work at http://www.thenatureofmetal.com.

Jill and Jason share their home with two nutty Jack Russell Terriers, Zipper (the ball obsessed) and ZigZag (a.k.a. Chicken Legs), pictured below.

Jackie Novak has loved and worked with animals her whole life. She has worked quite a bit in the rescue field and has been a vital part of the YWIP team for many years.  She has been known to make special treats for the daycare dogs and is always showering them with love.  At home, Jackie takes care of their dog Daisy, numerous donkeys, and John, her partner in crime since 2006. (She readily admits that John is the hardest to care for and that she will never again adopt another human male!!) 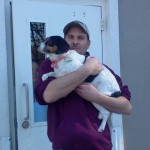 John Novak has worked with animals his entire life, starting with his work on horse farms in Kentucky which began with mucking stalls at age seven.  In his work at the stables, John groomed and hot walked Secretariat, assisted jockeys Pat Day and Willie Shumaker at the races, and even met the Queen of England!  He has also worked at dairy farms and animal shelters, so there aren’t many domesticated animals that he hasn’t cared for.  At home, he and Jackie care for their brood while Jackie does her best to keep John in line!!

Anna is a North Carolina native with a wide range of work experience.  She has been a Photography Assistant, a tour guide at Linville Caverns, a Veterinary Assistant, a lab tech, and now a wonderful caretaker of your fur kids.  In her spare time she enjoys going to shows of bands I’ve never heard of and spending time outdoors.  She grew up with corgis and the short stuffs here seem to know it, as they are drawn to her like magnets!! 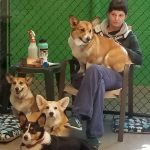 Stephanie is Asheville born and raised!  She is a baker by training, following in the footsteps of her grandparents, and owned her own bakery for 20 years before burning out (pun intended) and selling it in 2016.  She decided she needed a change and wanted to work with animals, so she came out of retirement to join the team here at YWIP.  She does have animal experience as a mother of four fur babies (Snoopy, Sweet Sally, Edgar Lamar, and Cora Leonard Paws) and has extensive experience with farm animals and as an amateur horsewoman.  She is excited about this career change and we are excited that she knows how to bake delicious goodies! 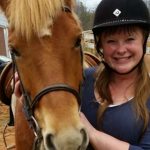 Shiloh was born in Connecticut and lived there for 10 years before, unfortunately, moving to Georgia.  He came to Asheville since it’s better than Georgia and he has some good friends in the area that convinced him to join them!  (And since he’s a big fan of hiking, he’s definitely glad he’s here!)  Shiloh is currently enrolled in the Penn Foster Veterinary Technician program and thought that caring for your dogs would be good experience to help him understand canine behavior.  He has a sweet Staffie of his own named Delilah that he rescued from an abusive situation and after working with a trainer she has made a lot of progress in overcoming her fear and anxiety. 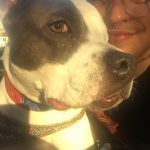 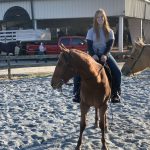 Another Asheville native, Lesley grew up on a farm in Leicester with sheep, goats, horses, guinea pigs, rabbits, cats and dogs…quite a menagerie!  She taught herself barrel racing when she was 13 and started competing soon after.  She has worked as a wrangler for local trail riding companies and volunteered at the Nature Center, so she probably has more animal experience than the rest of us combined!!  In her spare time she enjoys, you guessed it, riding horses, but other than that claims to be a boring person.  (I beg to differ.)  She is pictured with her buddy, Floyd, which is a super cool name for a horse.

Meghan worked for us years ago while she was a Veterinary Technician student at A-B Tech.  She sadly left us and moved to Pennsylvania to be a nanny for her niece and nephew until they were old enough to go to school.  She returned to Western North Carolina in 2019 and resumed her work in the veterinary field but luckily for us also wanted to come back and help here.  She works some weekend days caring for the overnight boarders and enjoying spending time with animals that she doesn’t have to stick needles or thermometers into!

Oliver hails from Georgia but made the (right) decision to come to Asheville in 2019.  Although this is his first experience working in a dog daycare, he got some practice with humans supervising an after school art program for about a year.  After a brief deliberation, he decided that dogs are easier since they don’t scream at each other or constantly demand that you make slime for them.  Oli is working part time for us while also serving as a Shift Supervisor at two different Starbuck’s locations, which the coffee drinkers on staff appreciate since he gets a free bag of coffee each week!  In his fleeting free time he enjoys baking and crocheting…I hear he can crochet a “mean coozie”.  Oli has a cat named Bubbles and no dogs, but we decided to hire him anyway. 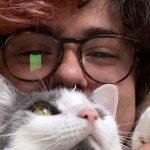